Posted by Nadav Lorber on February 5, 2021
Find me on:
Twitter 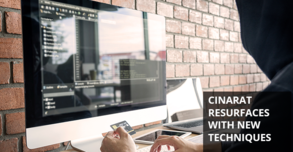 In this post, we cover the CinaRAT loader's evasive tactics, techniques, and procedures (TTPs), as identified and prevented by Morphisec’s zero-trust endpoint security solution powered by Moving Target Defense technology.

We review different versions of multi-staged loaders that attempt to inject and execute CinaRAT within a victim’s host memory. CinaRAT code is available on GitHub for download; generally it's just a rebranded QuasarRAT.

We focus on the evasive components that allowed attackers to sustain zero detection for such a long period of time (VirusTotal).

Our investigation begins with a Visual Basic script identified in a customer environment. We observed its delivery through an ISO archive file.

As soon as the image is downloaded and loaded into memory, it's written into a startup folder using an advanced method:

In order to copy itself into the autoruns, the script calls “NameSpace(7).Self.Path” which retrieves the autoruns path. This is a unique technique which isn’t often used for malware delivery.

The obfuscation method for each version is different. Within each version the attacker changes the comment line in each code line so they can avoid hash detection.

An interesting note is that the string technique utilized in the “GMR” variable evades VirusTotal when it is parsed.

These are the main changes between Visual Basic script versions

Figure 5: Part of a split string

The following table lists a few examples that correlate between the URL download domain to the file path saved within the victim host along with our internal version numbering.

As described in a previous stage, the Visual Basic script delivers a second .NET file.

The purpose of this .NET file is to decode the final stage .NET CinaRAT payload and inject it into a legitimate Windows process using process hollowing. This is done with several evasion techniques in order to avoid detection and AI.

The RAT payload resides in a base64 encoded string that, during the execution, is decoded and XORed with string as the key. Once the .NET DLL decodes the RAT, it hollows legitimate images in memory and injects it.

We observed four different versions along with four subversions between December 8, 2020, and February 2, 2021. The attacker updated the evasion techniques from version to version in order to avoid detection.

The following table lists the different internal versions along the with first seen date either from the attacker’s GitHub or VirusTotal submission.

In each version the code pattern is different but eventually, the execution flow stays the same except for minor changes. Here are a few examples:

The attacker obfuscated the code using an unregistered version of Eziriz .NET Reactor, although in V2 and V3 it seems they either switched to a registered version or discarded the remnant code as the following script was not there anymore. In V4 the attacker did not implement any obfuscator, but in V4.1 the obfuscation was implemented again with the “unregistered” remnant code.

From V1.1, the attacker added legitimate namespaces from popular .NET libraries to the loader. This evasion technique tries to disguise the loader as a legitimate .DLL in order to avoid analysis. It's also possible this technique can bypass AV solutions that implement whitelist rules on chunks from those .NET libraries. The following table lists a few examples of libraries that were used.

Figure 9: Some of the namespaces in V2

Analyzing the submission dates and the first detection dates on all of the loaders in VirusTotal suggests the code masquerading technique succeeds in bypassing AV solutions.

We have observed four different versions of RAT payloads. The first one used was QuasarRAT 1.4, while later on CinaRAT 1.0.1.1 was used instead with some modifications. For the C2 domain, the attacker mostly used a dynamic DNS service from myq-see[.]com

The following table correlates the observed RAT version with the C2 domain and Loader version.

The Morphisec platform prevents CinaRAT attacks with a zero-trust default-deny approach to endpoint security, powered by Moving Target Defense. Morphisec customers are thus protected from CinaRAT, regardless of the evasive techniques an attacker deploys to bypass AV and NGAV solutions.