Posted by Michael Gorelik on December 18, 2018
Find me on:
LinkedIn Twitter

Let’s face it – there are a lot of threat reports and threat data floating around. What makes the Morphisec Labs Threat Report different is the type of threats it analyzes. It focuses on the threats that pose a real risk to organizations, the ones that get past standard and next-generation AI antivirus. The report draws on forensic data captured from an installed base of approximately 2,000,000 Morphisec protected endpoints as well as in-depth investigations conducted by the Morphisec Labs threat research team.

So what do we see from the latest edition of the report? Findings include a spike in banking trojans, the return of exploit kits and the ongoing threat from cryptojacking – despite rumors of its decline. All of these attacks have at least one fileless component and 15% are fully fileless, never dropping a malicious executable on disk.

The report also dives into the technical details of some of the more interesting threats prevented by Morphisec, providing context beyond the numbers. By looking at tactics and techniques attackers are using to deconstruct traditional defense techniques and technology, security practitioners can better assess their organization's risk levels.

Key findings of the December 2018 Morphisec Labs Threat Report include: 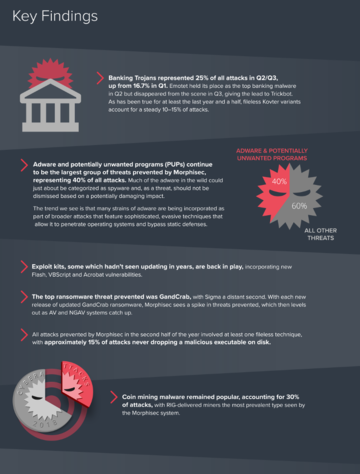 This expanded edition of the report also includes a special Focus on Finance section. Attacks targeting the banking industry and payment records and credentials consistently top Morphisec’s threat list. We take a look at threats and threat trends specific to the Finance industry, and how these impact customer outlook and behavior.