BE’ER SHEVA, Israel, June 3, 2016 – Morphisec, a provider of Moving Target Defense (MTD) endpoint threat prevention solutions, today announced it has been named a top startup to watch in Startup50’s Big 50-2016 report, an annual roundup of the top tech startups of the year.

“We are thrilled to receive yet more recognition of Morphisec’s innovative approach. As with Gartner’s Cool Vendor program, the Big 50 acknowledges the importance of young companies in solving the most acute problems facing enterprises today. For cybersecurity concerns, that means stopping APTs, ransomware, web-borne, PowerShell and zero-day attacks, which defeat traditional defenses. Blocking all these forms of attacks, Morphisec’s revolutionary Moving Target Defense technology will emerge in the near future as the mainstream endpoint threat prevention. CISOs that adopt the technology early will have an advantage over their more conservative counterparts.” 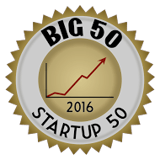 To earn a spot in the Big 50, startups must demonstrate viability through a series of increasingly rigorous questionnaires, tests and challenges. Startups from previous Big 50’s have raised record levels of funding (such as Cloudera’s near billion-dollar investment from Intel), have been acquired by major incumbents (HP’s acquisition of Eucalyptus), and have achieved successful IPOs (Square in 2015).

“Not every startup in the Big 50-2016 will have that kind of success, but I won’t be at all surprised if several of the startups in this report are household names in the coming years,” said Jeff Vance, founder and Editor-in-Chief of Startup50. “This is a really strong lineup, with startups tackling everything from artificial intelligence to water treatment to cybersecurity and Big Data.”

CISOs wanting to learn more about how Morphisec’s Moving Target Defense technology can help them stay ahead of the competition should visit www.morphisec.com, schedule a demo, or contact Morphisec at info@morphisec.com or 617-209-2552.

About Startup50.com and the Big 50-2016:
Jeff Vance founded Startup50 in 2014 in order to establish a hype-free zone and to start repairing the broken relationship between journalists, marketing/PR, and the startups themselves. Prior to founding Startup50, Jeff regularly contributed features stories to  Forbes.com, Network World, CIO, Wired, and many others. The Big 50 is Jeff’s yearly roundup of the hottest 50 startups to watch. These are startups that have all gone through Startup50’s rigorous vetting process and that represent the technologies, market sectors, and trends that are poised to challenge the status quo in the coming year and beyond.

For more information about this press release:
Dr. Ursula Ron
Director of Marketing at Morphisec
ursula[at]morphisec.com