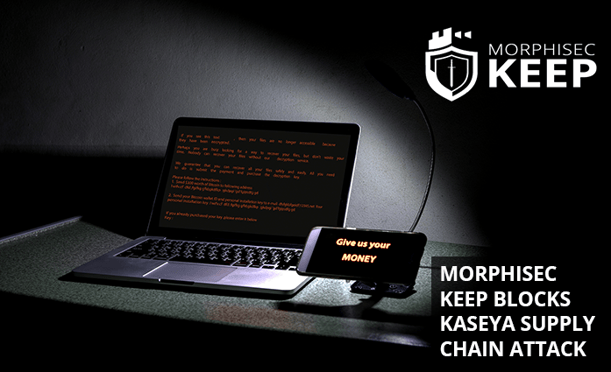 On July 2, 2021, our Cloud Workload Protection Platform, Morphisec Keep, successfully identified and prevented a REvil ransomware infection in customer domains. This attack was automatically blocked in real time due to Morphisec's proactive protection mechanism, which resulted in no harm to the customer.

Attacks like this demonstrate the critical nature of prevention for servers. Any such strategy must acknowledge supply chain attacks like this can bypass the most up-to-date network, identity, and antivirus controls. Following is a summary of our findings after preventing this attack in several customer environments.

Most of the attacked endpoints were Windows servers. The Morphisec Keep product immediately and automatically identified the process chain that led to the prevented ransomware execution, as shown in the screenshot below. This attack is particularly evasive because all the attack chain components are signed with digital certificates, starting from the Kaseya process, continuing with a vulnerable Microsoft Defender process, and ending with the side-loaded signed ransomware.

Figure 1: The threat summary in the Morphisec GUI

The initial stage begins with AgentMon.exe – a legitimate process for the Kaseya Virtual Server Administrator Agent. Then this process executes suspicious Windows batch commands via cmd.exe.

Those batch commands are followed by the execution of a malicious file named agent.exe. The following process then executes a legitimate signed Windows Defender process (MsMpEng.exe) that was dropped in the “C:\Windows\” directory.

This Windows Defender application file is known for its side-loading vulnerability that has since been patched. Once executed it loads a malicious DLL file named mpsvc.dll that was also dropped within the Windows directory.

This mpsvc.dll DLL is the actual functionality of the ransomware. Morphisec automatically blocked its execution and prevented the servers from being infected.

These commands are executed after the agent.crt file is dropped by a hijacked update routine called 'Kaseya VSA Agent Hot-fix’.

Next, it copies certutil.exe, a legitimate executable under the name cert.exe, and adds a random value to the end of the executable – this breaks the detection of certutil utilization by third-party vendors. It will later use this executable to decode agent.crt, delete it, and execute the decoded payload: agent.exe.

The loader is signed with a certificate named “PB03 TRANSPORT LTD,” a basic loader without any obfuscations. The loader contains two resources:

Once the resources are loaded into memory, the loader writes these files to C:\Windows and executes the MsMpEng.exe file (as System).

As others have written, there are two different hashes for mpsvc.dll that represent the same payload. The only difference is that one of them is padded with nulls at the end.

Figure 4: The differences between mpsvc.dll files

While the unpadded instance is digitally signed, the padding breaks the file digital signature in the other instance, so what has gone wrong?

The actual size of the DLL within the resource is 807,816 bytes while the size of bytes for writing this file within the loader is 808,328 bytes (0xC5588 in the agent.exe execution flow figure). This difference results in the null padding that breaks the digital signature and leads to a potential successful detection by some vigilant vendors.

Attacks like this demonstrate the importance of real-time prevention that does not rely on signatures by leveraging zero-trust at the endpoint. As shown in the first screenshot, all components of this attack are signed. This attacker is adept at abusing the implicit trust given to signed processes so their attacks can progress in target environments. Furthermore, detection-centric technology, like EDR, cannot be relied on when malicious activity is present on servers. The attacker is simply too close to their final goal for it to make sense to rely on reactive remediation through human intervention.

Morphisec Keep is built to deal with evasive threats like this automatically, in real time, and without prior knowledge of the attack. Through Morphisec Keep, you can extend your zero-trust strategy beyond identity and the network so that attacks like this one, where the supply chain is compromised, can still be prevented when they can land on the endpoint and make their way into the process memory.