Posted by Michael Gorelik on April 2, 2021
Find me on:
LinkedIn Twitter 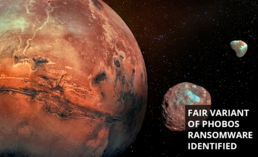 The developers of the Phobos ransomware have added new fileless and evasive techniques to their arsenal. Constantly keeping their attack up to date helps them bypass detection technologies through several distinct approaches, the latest of which we detail in this blog.

The following provides details on a new Fair variant of Phobos ransomware. The Morphisec IR team identified this variant during an incident response engagement in early March, provided as part of Morphisec’s new IR services offering. The affected company enlisted our services, and as a result, we identified this newest Phobos variant (compiled in November 2020) in their system. The technical details of the attack follow. 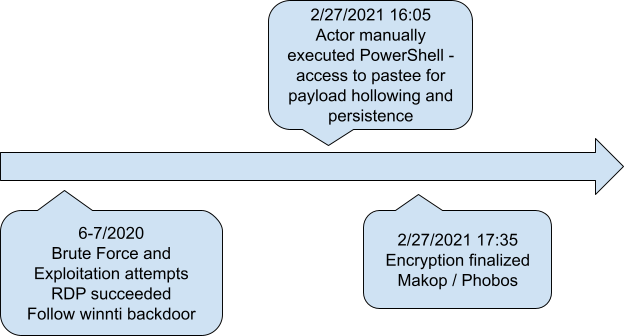 In this threat post, we will go into the details of the latest Fair / Phobos ransomware delivery and payload as has been identified as part of our routine incident response service procedures. We will present the significant changes that make this ransomware much more relevant than before.

During the first week of March, the Morphisec IR team was enlisted to help with investigating an encrypted backup server. We quickly identified an execution of PowerShell scripts that were delivering the ransomware within memory without a single executable on disk.

We observed the use of paste.ee (a Pastebin alternative) for the delivery of the loader and the ransomware component.

A deeper investigation revealed that the server was compromised for more than 8 months. While all indicators point to a probable brute force theft of the administrator password, backdoor accounts were created to maintain persistent access. Miners and botnets were also installed.

When we dove deeper into the ransomware payload, we identified significant improvements to the process and removal of footprints.

The original script was base64 encoded. The decoded script is slightly obfuscated using known techniques. As can be seen, the script downloads and evaluates the first component from a paste[.]ee/r/OwAyf URL. This component is yet another PowerShell command. Next, the script downloads the ransomware as a string from another paste.ee URL and follows a basic string replacement process which leads to a final stage of hollowing a legitimate MSBuild.exe process.

As was presented above, the first downloaded component is a PowerShell command.

The PowerShell command abuses a VisualBasic CallByName exported function to call the load of a .NET assembly directly in memory.

The loaded assembly is actually a loader obfuscated with an Agile.NET obfuscator. This loader is responsible for the hollowing of a Ransomware payload (the data parameter) into a legitimate .NET assembly of choice.

Looking through VirusTotal, we identified older versions of the similar loader obfuscated with different obfuscators--such as Vapor--even though the functionality and the activation function were preserved.

Phobos ransomware is not considered one of the more sophisticated ransomware encryptors. Furthermore, it would have a relatively high static detection rate if landed on disk. Nevertheless, it is immediately and constantly updated, and if executed from memory has high chances of success.

The latest FAIR version included some significant upgrades, which we will present here:

One of the more significant changes is a lower scope of encryption. Phobos’s developers removed the UAC requirement to maintain Medium integrity. This means no encryption of privileged folders, which leads to a lower footprint. While there are fewer files to encrypt, Phobos’s developers did not want to compromise on files with open handles, which most probably will have a significant impact on the victims.

1. Files are now opened with FILE_SHARE_DELETE. If there are opened handles with similar access rights, then the file open will fail.

2. Upon failure, the ransomware will query the currently opened handles.

3. Next, it will identify the process that is responsible for the handle by duplicating the handle into the ransomware process, then extracting the filePath it points to (only if file handle) and comparing it to the target filename.

4. Then the ransomware will iterate over the processes with the handles pointing to the file and will attempt to terminate them.

Possibly some of the target files are pointed by the privileged process. In this case, if the same processes have FILE_SHARE_DELETE access, the deletion will fail (though it may become pending).

An additional modification is to the list of important files and extensions representing previous versions of Phobos’s encrypted files (the intent is to avoid re-encrypting encrypted files). This list also reinforces some previous assumptions about a correlation between LockBit and Phobos ransomware.

We also identified an improved object oriented code style and the removal of redundant parameters such as nVolumeNameSize, which is either way ignored. There was also the removal of redundant functions such as GetFileSize as the information was already available through FindFirstFileW, which populates all the required data. The developers also reduced code obfuscation and increased the use of WinAPI for secure decryption of strings.

An additional improvement to the coverage of files is the support of volumes that span multiple physical drives. The implementation is no longer naive, and in fact, now adheres to the best practices of Windows’ internal development. DeviceIoControl is used twice with IOCTL_VOLUME_GET_VOLUME_DISK_EXTENTS to extract the size and then the extent of the physical drive path.

The developers also minimized the interaction with OS native controls due to lower privileges, removed the use of netsh for disabling the firewall, and removed the use of bcdedit. The current version still attempts to delete shadow volumes if enabled and delete backup catalogs on servers (wbadmin will work only on servers).

Based on the research presented here, we can safely conclude that the developers of Phobos are aiming to increase their foothold in the enterprise business. They are gradually moving to fileless delivery and footprint reduction with immediate impact. There are also clear indications for specific emphasis on targeting servers as some of the commands are only relevant to servers.

Obviously, businesses need to look at how to prevent the attack chains much earlier, during the initial access or execution stages as described by MITRE.